On a frozen February morning in the year 2000, Matt Davis was woken up with the news that his father had taken his own life. Matt was just 19 years old. His dad was a millionaire business owner, family man, and community leader. He had died with everything that anyone would perceivably want in life. He was a model for success as the world sees it. This life-altering experience became the fuel for Matt’s quest to learn, live and teach others how to be successful and have balance in life. After the death of his father, Matt did service work in Australia until the winter of 2001. There in Australia, Matt was mentored by his father’s longtime business colleague and fellow community leader. This mentorship was the beginning of Matt’s journey to help others find increased harmony in their lives. Matt returned from Australia determined to find a career, a family, and a hobby that he could be passionate about during difficult times. While attending university at night, Matt started working full-time in sales. He quickly learned that he had an aptitude for it, becoming the top salesperson in the organization. Since then, Matt has gone on to win top accolades for sales in the insurance, medical, real estate, banking and finance industries. In addition to his professional success, Matt loves being a father of four. The interests of his life center around those of his family. He applies many of the Steelyard principles of balance to his life on a daily basis. Matt also finds great enjoyment and release through his hobbies, which include almost all things athletic. He currently loves spending time at the gym with his wife and family, and has become a cycling enthusiast over the past few years. Matt has spent the last 20 years forging success through balance, and he feels that his calling in life is to help others do the same. Through this work, Matt hopes to prevent those around him from feeling the way his dad felt at the end of his life.

We all aspire to improve ourselves and to achieve something in our lives. We have an innate desire to create and develop ourselves. It is John’s passion to help others cultivate these internal desires and to help them realize their dreams. Helping to develop Steelyard Academy, while internalizing and teaching Steelyard's tested principles has provided John the opportunity to pursue his passion. John earned a bachelor’s degree in pshchology and worked as an advertising & marketing researcher. For several years, he had the opportunity to travel all over the country and other parts of the world discovering what motivates people into action. He then earned his juris doctorate degree and practiced law while developing his entrepreneurial talents running his own boutique law firm and representing individuals and businesses in many different capacities. Outside of the office, John enjoys learning and developing new talents. He loves spending time with his family while traveling and enjoying outdoor adventures and finds personal fulfillment in donating his time to youth organizations and volunteering time at his church.

Learning, living and leading a life of balance is one of life's greatest challenges and life's greatest pursuits. True success and balance are built upon service to others, creating environments of learning, living and leading, and cultivating meaningful relationships. Tim has dedicated his life to teaching others how to find, maintain and enjoy a life of balance and success by utilizing the Steelyard Academy's principles. Tim graduated from the University of Utah with a bachelor's degree in exercise and sports science. Upon graduation he pursued a childhood dream by joining the USAF and flying the F-15E. Tim has been successful throughout his 19+ years of military service highlighted by graduating from and instructing at the USAF Weapons School (Top Gun for the USAF). When he is not flying, Tim enjoys spending time with his family and friends, serves and volunteers with the youth of his local community and church, and continues to learn, live and lead a life of balance and success. 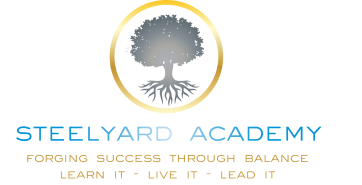